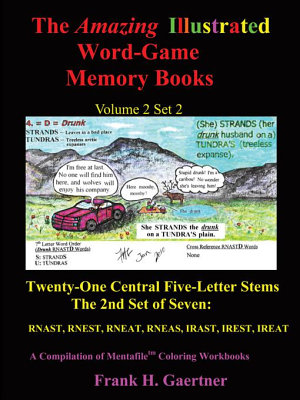 This book, Volume 2, Set 2 of the AIWGMB, is a continuation of a three-set series of stories and illustrations representing all of the 7-letter words captured by The Central Twenty-One Five-Letter Stems that feed into the Central Seven Six-Letter Stems of Volume 1, Set 1. Knowledge and flash, photographic-memory recall of these word lists, together with those of the Auxiliary Seven Six-Letter Stems of Volume 1, Set 2 can be valuable assets for any wannabe, top contender in our rapidly growing, competitive, word-game, social networks. The wordlists, organized in Mentafile format, are coded with peg-words assigned to each letter of the alphabet. This type of iconic coding-organization can make letter-management, and identification of 7-letter words within scrambled arrays, effortless, almost as though one has an app that automatically brings bonus-words to mind as one plays off letters "on-the-way" to one of the Central Seven Six-Letter Stems. For example, in a board game, where letters must be unscrambled to reveal hidden words, one might hold, in alphagram order, the following seven letters; ADNRSTU. For those accomplished with Vol. 2, Set 2 of the AIWGMB, the identification of the five-letter stem, RNAST, and the letter, D, within ADNRSTU, would be instantaneous, along with the mental search for the story and illustration of "She STRANDS the drunk on a TUNDRA'S plain." Alternatively, one might hold ADNRSST, which would immediately bring up the word STRANDS from that story. STANDER, the only other possibility for a 7-letter RNASTD word would show up with the holding of ADENRST, the only bonus word featured in the drunk file of RNEAST, one of the Central Seven Six-Letter Stems of Vol. 1, Set 1. Therefore, with no E, R or S in the hand, one skilled in the use of The AIWGMB would know, with valuable certainty, that no 7-letter bonus words were available for play. But the fun's not over. It really begins when we add to our search the thirty four, 8-letter RNASTD words of RNAST, RNEAST and INRAST. Having learned to "read" alphagrams from the flashcards connected to the stories and Illustrations of this series, we now watch our opponents shrink in terror as we unleash our knowledge and skill at finding and playing one of these 8-letter winners!

Authors: Frank H. Gaertner
Categories: Art
This book, Volume 2, Set 2 of the AIWGMB, is a continuation of a three-set series of stories and illustrations representing all of the 7-letter words captured b

Authors: Frank H. Gaertner
Categories: Games & Activities
If ever you have been humiliated playing word games, wondered how some players seem to pull seven-letter words out of a hat, questioned what your favorite game